Our group has published a paper on a novel method for generating long, low-density plasma channels which could be ideally suited to future laser-plasma accelerators operating at multi-kilohertz pulse repetition rates.

The method proposed in this work builds on earlier work in which plasma channels were formed by hydrodynamic expansion of a hot plasma column. The hydrodynamic expansion of the plasma column into the cold surrounding gas drives a radially-expanding shock wave. The plasma formed within this structure has a density which increases with radial distance from the axis, corresponding to a refractive index which decreases with radius; the structure therefore forms a gradient refractive index waveguide which is capable of guiding intense laser pulses. 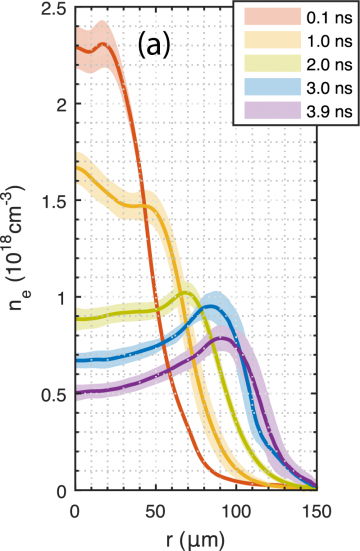 Temporal evoution of the transverse electron density profile of a HOFI plasma channel.

The new approach uses optical field ionization (OFI), in which the high electric field within an intense laser field pulls electrons out of atoms. This mechanisms heats the ionized electrons by an amount which can be controlled through the polarization of the laser. Since OFI operates at the level of single atoms, it is independent of the density and hence it is possible to generate plasma channels with lower on-axis densities. The ability to form low density channels is important for laser-driven plasma accelerators since the particle energy gain of the accelerator depends inversely on the plasma density.

In this new paper we demonstrate the formation of hydrodynamic optical-field-ionized (HOFI) plasma channels by focusing femtosecond laser pulses with a spherical lens. Simulations of the expansion of long plasma columns formed with an axicon lens show that it would be possible to form plasma columns 100s mm long, with axial densities of order 1017 cm-3.